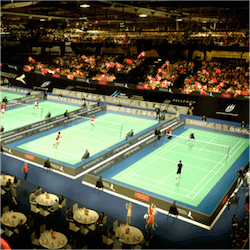 Badminton fans have had to re-assess their online sports betting options for the 2017 Badminton World Championships, set to run until Sunday in Glasgow’s Emirates Arena. This follows the surprise departure of the men’s singles second seed, Malaysia’s Lee Chong Wei, in the first round on Tuesday.

Lee was neck-and-neck with Chinese top seed Chen Long in the outright futures betting to win the men’s singles title, a victory that would cap his one bronze and three silvers in the tournament to date. However, he went down 21-19, 22-24, 21-17 in his opening match against French shuttler and World No. 26 Brice Leverdez.

Chen fared much better in his first-round match, shutting out Mauritian Georges Julien Paul for an easy 21-7, 21-9 win. He’s still the favourite, at $2.75 on some sites, to win the men’s singles championship outright. Leverdez remains a long shot, at around $41.00.

Praneeth, Srikanth, Sindhu Through for India

Fourth seed in the women’s singles, India’s World No. 5 Pusarla V Sindhu, qualified for a bye in the first round by virtue of her seeding. It took her 49 minutes to beat South Korea’s Kim Hyo Min 21-16, 21-14, to advance to Round 3. Currently at $10.00 in futures betting, she could prove a contender.

Another Indian star, B Sai Praneeth, is at $26.00 in futures to win the men’s singles, after beating Hong Kong’s Wei Nan 21-18, 21-17. The Indian shuttler that many punters fancy for the men’s singles title, however, is Kidambi Srikanth.

Seeded eighth in the tournament, Srikanth dispatched unseeded Russian Sergey Sirant in a blistering 28 minutes on Monday, winning 21-13, 21-12. He’s third-favourite to take the championship, at around $7.50, behind betting leader Chen and Chinese five-time world champion Lin Dan, who is offered at around $3.25 and also made it through Round 1 with no trouble.

There’s still plenty of badminton ahead this week, though, and one off day by a top seed against an in-form, unseeded opponent is all it will take to shake up the top of the betting again. Badminton fans and sports punters both have every reason to keep up with the action.