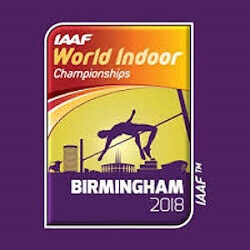 The 2018 IAAF World Indoor Championships are being held in the Arena Birmingham, with seating for 8,000, from March 1-4. It’s just as well the athletics world championships are indoors, given the ‘beast from east’ that currently has the West Midlands city and the rest of the U.K in its icy grip.

This year marks the second time that Birmingham is hosting the championships. The first occasion was in 2003, when according to leader of the Birmingham City Council Ian Ward, they did such a good job, that it sparked the notion that Birmingham could host the Commonwealth Games – which indeed the city will, in 2022.

In an interview published in the March 1 issue of Athletics Weekly and on the magazine’s website, Councillor Ward said that back in 2003, the IAAF confessed that Birmingham had presented the best World Indoor Championships ever, which vindicated his bidding team’s dogged commitment to the original bid.

Inspired by the 2003 success, he remained an integral part of the team that would eventually secure Birmingham the 2022 Commonwealth Games, as well as the 2018 IAAF World Indoor Championships, making it only the second city (after Paris) to host the championships twice.

Back when the Birmingham team first succeeded in their bid to host the 2003 championships, however, the city wasn’t exactly thought of as a magnet for international sport.

Ward said in the interview that even after hosting a wildly successful event in 2003, in which the spectators almost “blew off” the roof when Ashia Hansen leapt from fourth to first in the triple jump on the final day, support for a Commonwealth Games bid was muted.

It was a long struggle for him and the team, but with both a second World Indoor Championships and a Commonwealth Games now on the schedule, attitudes have changed. He believes Birmingham is perfectly positioned to become the heart of British athletics and international competition.

Apart from the magnificent Arena Birmingham, the Commonwealth Games will also make use of the Alexander Stadium in the city’s Perry Barr district. Now renovated and with a capacity of 40,000 planned for the Games, it will thereafter revert to a 20,000-seater. Ward is confident that the stadium’s facilities are perfect to make it the British national athletics centre.