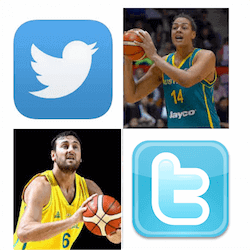 Bogut and Cambage at it Again

It was certainly not a matter of life and death; this was clearly stated by Australian NBA star Andrew Bogut. What all the fuss was actually about was two Australian Olympic stars and their fellow teammates, exchanging blows on Twitter. This comes almost 12 months after the initial public spat made headlines during the Rio 2016 Olympics. It seems the latest hostilities between Liz Cambage and NBA star Andrew Bogut has caught the attention of the media once again.

The public animosity between the two Olympic stars resurfaced on Wednesday night when Cambage took a cheap shot at Bogut on Twitter, sparking a string of responses that that went on through the night. The two athletes made headlines during the Olympics when they traded unpleasant tweets until finally a sort of truce was declared; at least for the public. The pair were given the all clear by the public when they were spotted embracing in an awkward hug at the Games.

Since then, the two Olympic stars have kept to their truce while the country got on with other more important issues. But on Wednesday night, it all fell apart when the two provided a spectacle of entertainment for thousands of twitter followers. It all started with a tweet Bogut posted stating that he didn’t enjoy reading newspaper gossip columns.

It All Started So Innocently

Andrew was then invited to be a guest editor for the Herald Sun by Luke Dennehy. It all seemed so harmless and actually quite touching. It ended up being the spark that revived a year-old feud between two of Australia’s biggest Olympic stars. Somewhere along the line, Bogut sent a barb about Cambage’s frequent appearances on the Melbourne social scene. Cambage immediately responded with a dig at the Bogut’s ongoing injury problems.

Bogut got stuck into exchange, asking for Cambage’s rates for being a local DJ. He explained that he would have to work out a different payment method than which the Revolver offered. Cambage’s reply was simple and straightforward. She implied his size was a true measure of his small brain. And so began the feud in earnest. Bogut explained that it was just him, an employed basketball player and a local blue light disco DJ having a bit of fun.

Cambage questioned Bogut’s fascination with her, wanting to know if it was because she actually had a life outside of basketball and still manged to break records. The exchange eventually attracted a string of comments from a number of NBA and NBL stars including Patty Mills. After the whole thing ended, Bogut was keen to point out that while a lot is read into these twitter matches, it’s really not that important.