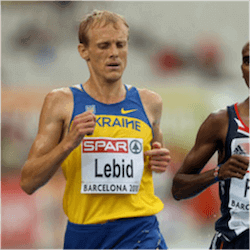 Fans of endurance athletics already know who the greatest men’s contestant of the modern era is: Serhiy Lebid.

Lebid took his first European Cross Country championship title in 1998, but was then shut out by Guerra two years in a row. He came back with a vengeance in 2001, setting off on a five-year streak during which he remained undefeated in the European championships.

Then he took two more titles in 2007 and 2008, before racking up his ninth in 2010, frilly establishing himself as one of the greatest runners of our generation.

Lebid was born in 1975 in Ukraine’s fourth-largest city, Dnipropetrovsk a.k.a. ‘Dnipro’, on the Dnieper River, in what was then the Soviet Union.

Outside of the European Cross Country Championships, his record is somewhat spotty, although he did take gold in the 5,000m race in 1999, 2001 and 2003 at the Universiade, a multisport event organised biennially by the International University Sports Federation. It does seem like he prefers running in Europe, and that the European Cross Country Championships really are his favourite of all races.

He’s never taken an Olympic medal, however; the closest he came was a seventh place in the 5,000m at the 2000 Olympic Games. His best performance at the World Cross Country Championships was a 2001 silver in the long race in Ostend.

Nevertheless, his pre-eminence in the European Cross Country Championships cannot be gainsaid. Alongside his nine golds, he also won a silver in Malmo in 2000, and took the bronze three times: in 1997, 2005 and 2009.

Long-distance runners have better competitive lifespans than sprinters, and at the age of 42, Lebid remains a strong contender in any race he’s entered for. He keeps racking up the wins and he doesn’t look set to slow down any time soon.