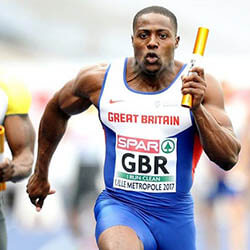 Great Britain have been officially disqualified from the men’s 4x400m relay that’s set to take place at the European Athletics Team Championships following a reserve shot putter being named in the line-up by mistake. Youcef Zatat, who was not part of the athletes that went to Poland, was included in the quartet in place of sprinter Rabah Yousif.

Neil Black, the UK Athletics performance director, blamed it on a technical error, saying that it was gutting for the athletes in particular that were called out. Youcef Zatat added on social media that he definitely would have taken part in the relay. As a result of the increased attention, he joked that he would be taking bookings for public events and club appearances. He added that even though it proved a funny joke to him, he felt for the athletes that had gone all that way not to be able to run. The British team finished in fifth place overall with 302.5 points. Italy claimed victory for the 4x400m race and finished fourth in the overall standings with 316 points.

Twelve points were given for the winner of each event, with 11 available for second place – meaning Great Britain would still ended in fifth if they had won the 4×400m and Italy had come second. Black added that there had been a technical error with their declaration process, and that they are currently exploring what happened. He continued, stating that the athletes were amazing and took the news well.