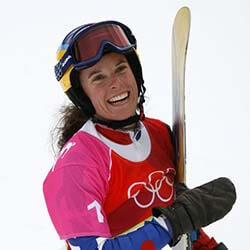 Former Olympic snowboarder Julie Pomagalski has died. The 40-year-old French snowboarder died in an avalanche in the Swiss Alps on Tuesday, the French ski federation has confirmed. The exact location of her death has not been confirmed. Swiss as well as local media have however both reported the former Olympian to have died in an avalanche that occurred on Gemsstock Mountain in Uri, Switzerland.

According to the statement released by the ski federation, a guide, Bruno Cutelli, was also killed by the avalanche.  A group of four people were reportedly free-riding on the downwards slope down Gemsstock, as confirmed by Uri law enforcement authorities. Police also confirmed that the avalanche had occurred without any warning, and for reasons that have yet to be investigated. Police did not immediately identify the victims, only describing the incident has having killed two of the people on the slope, and injuring a third.

Free-riding is defined as snowboarding or skiing in on backcountry terrain, i.e. not on a beaten course.

According to Swiss authorities, a search and rescue team consisting of a helicopter and two search dogs had been dispatched to the mountain, but that Pomagalski and Cutelli had both been buried under the snow by the time the rescue team arrived.

Pomagalski competed in the parallel giant slalom at both the 2006 Turin Games and the 2002 Salt Lake City Olympics. She also won gold in the snowboard cross event at the snowboard world cross championships in 1999.