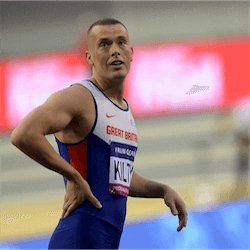 Amid all the exciting athletics action on display at the SPAR British Indoor Athletics Championships last weekend, on February 17 and 18, Brit fans also suffered the disappointment of seeing sprinter Richard Kilty pull out of the 60m semi-finals and the rest of the tournament.

Kilty has aggravated an Achilles tendon injury, and the flare-up not only sank his hopes in Birmingham last week, but it also put paid to any chance of him going back to Birmingham next month for the 2018 IAAF World Indoor Athletics Championships from March 1-4.

The British Indoor Championships were the last opportunity for selectors to see the contenders in action, before choosing a final squad for the World Championships, and that team was announced on Tuesday.

On Sunday, Asha Philip won the women’s 60m sprint for the third year in a row, finishing in 7.12, the best time of her season. Last year, she was also part of the 4X100m team in London that took silver. She’s down to compete in the World Indoor Championships in the 60m, along with Daryll Neita.

Laura Muir, who took two wins at last year’s European Indoor Championships, ran a calculated 3,000m in Birmingham last weekend. She held back until exactly the right moment to crack on the pace, winning on 8:46.71. She’s also included in the British team returning to Birmingham for the IAAF championships.

Andrew Pozzi started his men’s 60m hurdles final a little slow on Sunday, but powered back to win it, and retain the title, in 7.58; also a season-best. He’s made the team going to the Indoor World Champs, but he’s admitted to reporters that he needs to pick up the pace of his training before then.

Davies set a new record of 21:25.37 in the women’s 5,000m walk, while Hague set a new top height of 5.65m in the men’s pole vault. Both will be gutted to have ben left out the team for the world championships.