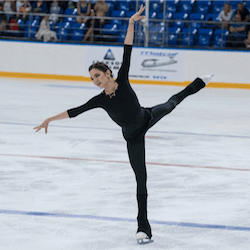 Evgenia Medvedeva’s path to the Winter Olympics in South Korea next year just got a little rockier. The Russian 18-year-old had to withdraw from the 2017-18 Grand Prix of Figure Skating Final in Japan after breaking a metatarsal.

If punters need any reminder that ‘pretty’ sports like figure skating make just as many demands on an athlete’s body as the more confrontational disciplines, Medvedeva’s broken foot-bone serves as a timely one. She picked the injury up while skating in last month’s NHK Trophy, but still emerged victorious.

She’ll need that grit going forward. Her foot has been in a cast ever since, and by skipping the Grand Prix Final in Nagoya from December 7-10, she gives herself more recovery time before the 2018 Russian Championships, scheduled for December 21-24 in Saint Petersburg.

Medvedeva’s loss is Japan’s Satoko Miyahara’s gain. The Skate America victor was first alternate, so she gets Medvedeva’s spot at the 2017-18 Grand Prix of Figure Skating Final.

It will be a blow for her not to be able to defend the Grand Prix of Figure Skating title she’s won two years in a row, but Medvedeva will need to be in top form for the Russian Championships.

She’s also been champion of Russia, Europe and the world two years running, but she needs to be fit enough in Saint Petersburg to secure her spot in the Russian team selected for the PyeongChang 2018 Winter Olympics.

However, even if her injury heals well and quickly, a stellar performance at the 2018 Russian Championships might still not be enough to send her to her first Olympic Games.

Tuesday, December 05, was D-Day for Russia and the International Olympic Committee. The head of Russia’s Independent Public Anti-Doping Commission, Vitaly Smirnov, met with the executive board of the IOC, as did Medvedeva and Russian Olympic Committee President Alexander Zhukov.

Figure skating fans are hoping that their testimony will convince the IOC that Russia is taking effective steps to stamp out doping. That’s the only way they’ll allow Russia to take part in next year’s Games.

Hopefully, they can sort it out: it would be a travesty for Medvedeva to miss her first Olympic shot at this point in her career.