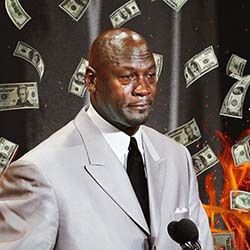 NBA goat Michael Jordan reportedly finds himself smack-bang in the middle of the GameStop trading conflagration that this week threatened to topple all of Wall Street sideways.

Jordan has his own money, as well as the money of several new investors into his majority ownership of basketball league franchise the Charlotte Hornets, entrusted in the investment expertise of two of his business partners, Daniel Sundheim and Gabe Plotkin. Both partners – both big hedge fund players – are rumoured to have suffered calamitous losses of apocalyptic proportions resulting from a short-selling war wagered with Reddit investors.

The war is rumoured to have wiped out more than US$5 billion from the profiles and pockets of several notable Wall Street hedge funds. And the really bad news is that the hedge fund trader at the centre of it all is none other than Plotkin and his now-hated Melvin Capital fund.

Jordan’s investment partner was apparently caught in the act while pushing a blatant and aggressive short-selling ploy. Plotkin is now left drawing the shortest straw after individual “Average Joe” investors joined forces in driving up the value of GameStop’s shares by over 1700%. Since Melvin Capital had bet heavily against the likelihood of an increase in the value of said shares, it is now anyone’s guess exactly how far into the red the underhanded scheme has dumped Plotkin and his fund.

What is however clear is that the recent losses, which are said to amount to well over US$300 million, may be the final death knell to Jordan’s current as well as his future business endeavours.