Paralympians for US Invictus Team 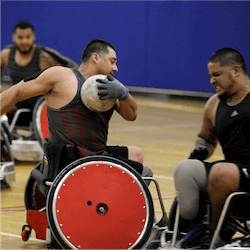 Australia’s adaptive sports community is eagerly awaiting the arrival of Prince Harry for the launch of Invictus Games Sydney 2018 on 7 June. The British prince heads to New South Wales after completing other charity commitments in Singapore, to celebrate next year’s fourth edition of the competition he inaugurated in 2014.

The 2017 Invictus Games will be held in Toronto in September. A team of 53 Australian athletes, all of them current or former military personnel with injuries, disabilities or illnesses, is already in training. Team members and dignitaries will join the prince at Admiralty House on 7 June, for a launch ceremony to welcome the 2018 games to Sydney, followed by a reception on the Admiralty House lawn, at which the prince will meet team members and their families.

In the afternoon, Harry will be at Circular Quay to watch demonstration matches of several Invictus Games sports, including indoor rowing, wheelchair basketball and wheelchair rugby, and sitting volleyball. The prince’s day ends on the water, watching a yacht race around the harbour. On 8 June, he will join Invictus Games Sydney 2018 organisers and officials for a private working day, at which they will review progress to date on the 2018 tournament.

The Invictus Games are inspired by the Warrior Games, an adaptive sports event exclusively for serving or retired US military personnel with disabilities. Prince Harry’s version is open to all of the allies that have served in conflict alongside the UK in recent decades, and the 2017 Invictus Games are the biggest yet, with more than 500 athletes from 17 nations invited.

The UK’s team has yet to be decided, although 306 athletes are hard at work all over Great Britain and Northern Ireland, trying to qualify for the final team of 90. Ukraine has narrowed their squad down to 30; 15 selected for the team, and 15 on the reserve list. In Afghanistan, 71 athletes competed in qualifiers, before a final team of just seven was selected to compete in powerlifting, sitting volleyball and indoor rowing.

The USA is likely to put on a big show in Toronto. A 90-member team is set to compete in 12 of the Invictus Games sports, including swimming. That’s where punters can expect them to be especially strong, with five-time Paralympics gold medallist Brad Snyder and 100m Breaststroke Paralympic champion Elizabeth Marks on the team.