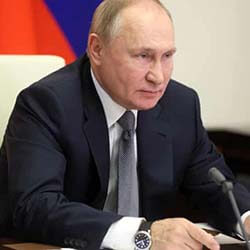 Russian president Vladimir Putin has now given his assurance to Beijing that he will indeed be attending the opening ceremony of February’s Winter Games.

Putin reportedly made his promise of unity during a video call with Chinese leader Xi Jinping, while adding that what has been formed now is a new relationship built on such principles as “non-interference” in one another’s internal decisions. In doing so, the Russian leader places himself once again in contradiction with the biggest part of the Western world.

Human rights abuses in both China and Russia have led to increasing pressure from the United States and the Western world. The US, Australia, UK, and Canada have all announced that no diplomatic officials will be attending the Winter Games – this largely in response to China’s atrocious human rights abuses in Xinjiang and Hong Kong.

According to Kremlin spokesperson Yuri Ushakov, Xi understands better than any US and Western leader the concerns Russia is currently experiencing regarding its western borers.

Putin’s trip to China will mark a rare and unusual trip for the Russian president. Only twice has he travelled abroad since the outbreak of the global health crisis – once to Geneva to meet US President Joe Biden, and once to New Delhi to meet Indian Prime Minister Narendra Modi.

Putin’s pledge to attend the Games comes in the wake of a senior US official’s arrival in Moscow for talks with local leaders over diplomatic relations between Russia and the Ukraine.