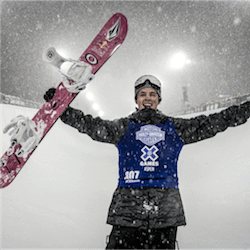 Australia’s not the first country that springs to mind when people mention winter sports, but online betting fans will be expecting Aussie athletes to punch above their weight again at the 2018 Winter Olympics in Pyeongchang, South Korea in February.

The Australian team is likely to include aerial skier Danielle Scott and snowboarder Jarryd Hughes, who just won World Cup gold medals; Scott in China and Hughes in Austria.

Before the Olympics, however, Aspen, Colorado hosts the 2018 Winter X Games from January 25-28, and the Australian that punters will be watching eagerly in his final tournament before the Olympics is Scotty James.

The 23-year-old from Melbourne won the Snowboard SuperPipe gold at the 2017 Winter X Games, and after a blazing 2016-17 season is expected to dominate his discipline both in Aspen and Pyeongchang next year.

From Prodigy to World Champion

James made his Olympic debut at the age of 15 at the 2010 Vancouver games; he was the youngest male athlete at those games and the youngest male competitor in an Australian Olympics squad in 50 years. Despite competing with a broken wrist, he finished 21st in the Halfpipe.

He returned for the 2014 Winter Olympics in Sochi, but he hadn’t hit his stride yet. In the past two years, however, he has turned into one of the top Halfpipe/SuperPipe riders in the world. He took Halfpipe gold at the World Championships in Kreischberg, Austria in 2015, and again in Sierra Nevada, USA, in 2017.

James took a SuperPipe bronze in Aspen in 2016, and another bronze at the 2017 Winter X Games in Dual Slalom, along with his SuperPipe gold. The Australian Institute of Sport recognised him as the 2017 Male Athlete of the Year, and he may be in for an even bigger year in 2018.