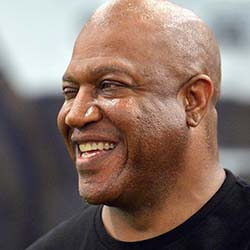 Legendary WWE superstar and Hollywood cult persona Tommy “Zeus” Lister has died. He was only 62.

After starring as the “bad guy” in Hulk Hogan’s big hit 1989 film No Holds Barred, the WWE wasted no time at all roping Lister into the wrestling entertainment scene as Hogan’s nemesis in the ring. He also went on to make a cameo appearance in 1996, when he shocked the wrestling world with his historical comeback towards the end of Hogan’s professional career.

Lister’s agent, Cindy Cowan, has in the meantime confirmed the star’s untimely death, confirming also that he was declared dead at his apartment by medical personnel sent to his Los Angeles home via ambulance. Loved ones reportedly became worried after losing all contact with the star on the Wednesday before his passing, and subsequently decided to request a welfare check from the Los Angeles County Sheriff’s Office.

His death is understood to be connected with a month-long struggle against a viral infection. He was according to Cowan feeling weak and having trouble breathing during the days leading up to his death.

Though certainly a beloved WWE wrestler, Lister is best known for his career in film. After his portrayal of “Deebo” alongside Ice Cube and Chris Tucker in the epic 90s comedy “Friday”, he would go on to star in big-screen hits such as The Dark Knight, The Fifth Element, and Austin Powers: Goldmember.

Lister days before his death spoke about looking forward to spending the holiday season watching basketball and hanging out with his daughter.