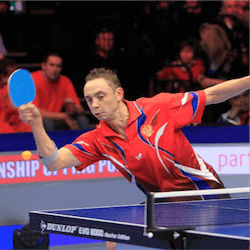 Table tennis is definitely a minority sport in Australia, where we tend to reserve our greatest enthusiasm for more rugged outdoor pursuits. The beauty of online betting sites, of course, is that being in the minority doesn’t really matter. Australia’s table tennis fans can follow their favourite tournaments online, while enjoying a wager on any match they fancy.

Most online punters are also pretty open-minded about giving new sports a go, and once every two years they have the perfect incentive to investigate table tennis: the ITTF’s World Table Tennis Championships. Sponsored by Swiss manufacturing giant Liebherr, the 2017 tournament will take place in Dusseldorf, Germany, from 28 May to 5 June.

East Asian nations continue to dominate both men’s and women’s table tennis. In the ITTF men’s rankings, there are five Chinese players in the Top 10, including World No. 1 Long Ma and World No. 2 Zhen-dong Fan. Japan, Hong Kong, South Korea and Taiwan fill four more spots in the Top 10, with Germany’s World No. 5, Dimitrij Ovtcharov, the only European contender.

In the women’s rankings, China fills four of the Top 10 spots, including Nos. 1 and 2, Ning Ding and Yu-ling Zhu. Once again, Germany is the only non-Asian nation in the list, with Ying Han at No. 6. Players from Japan, Hong Kong and Singapore comprise the rest of the Top 10.

The final field for the 2017 World Table Tennis Championships will be drawn from the nominees of around 150 countries, including 37 Asian states and 45 in Europe.

The indoor location gives the World Table Tennis Championship an advantage sports in big outdoor arenas don’t have: easier adaptation for the television audience. This year, for example, the ITTF is debuting a black-topped table for the World Championship.

It shouldn’t make any difference to players or spectators in the arena, but it is going to make play much easier to follow, and more exciting to watch, on television and live-streaming. The new design also fits in with the Messe Dusseldorf’s sleek, modern exhibition hall, and the finishing touch will be solid table bases emblazoned with the red, gold and black of the German flag.