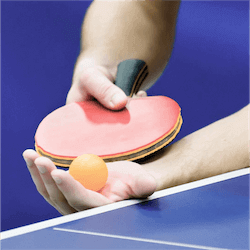 Earlier this month, Guinea Bissau officially became the 226th member of the ITTF, meaning that the national table tennis associations of every country on earth are now under the aegis of the federation. The 2017 World Championships will be the first that the whole world is watching, even though only 108 countries are participating this year.

While Australian punters follow the action at online betting sites and on television, fans travelling to Germany to watch their heroes in the flesh will be treated to the best that the Messe Dusseldorf centre has to offer. There are 613 athletes nominated for the final qualifiers on 29 May, and the main draw will be played from 30 May to 5 June.

In the men’s rankings, China has five athletes in the Top 10, with a lock on the four top spots. 2015 Men’s Singles World Champion Ma Long is No. 1, followed by Fan Zhendong, Xu Xin and Zhang Jike.

With three Olympic golds and eight world champion titles on his record, Ma has been a star of global table tennis for more than a decade. He has held the World No.1 spot since 2015, so he is sure to be the top seed in the men’s singles in Dusseldorf.

However, Fan Zhendong is on a career trajectory similar to Ma’s, starting with a 2014 Youth Olympic Games gold medal in Nanjing at the age of 17. Now aged just 20, he has won 9 ITTF titles since 2015, and finished as runner-up in four.

Fan also took the bronze medal at the 2015 World Championships, and he has secured some hard-fought victories over Ma in recent months. He could well be worth a punt in Dusseldorf.