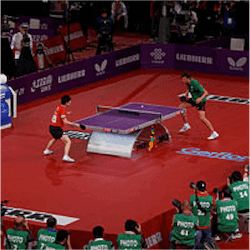 Australian betting fans will be able to join in the action at the Messe Dusseldorf trade fair ground via online betting sites, too. The International Table Tennis Federation (ITTF) decision to use black tables for the first time this year is a move that should make the television coverage more dramatic.

In the last week of April, the ITTF announced that 108 countries would be participating in the 2017 tournament, with a total of 613 athletes for the final qualifiers on 29 May. The main draw will start on 30 May with the Doubles matches, and the Singles start the next day. Semis and finals will be played from 3-5 June.

The ITTF players list includes five Australians, although none are in the Top 100 of the ITTF rankings. Still, Jian Fang Lay may be worth a punt to make it through to the first round of the Women’s Singles at least; she is currently World Number 102.

The other Australian woman who has qualified for the Dusseldorf tournament is Sarah Tan, but neither she nor Lay look likely to seriously trouble defending 2015 Women’s Singles Champion Ning Ding. The Chinese athlete is top of the world’s women’s rankings, with Yu-Ling Zhu second and Meng Chen at No. 5, so China’s legendary table tennis dominance appears set to continue.