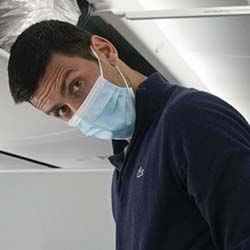 It has now emerged that the recently deported Novak Djokovic is the controlling shareholder (80%) in a company aiming to develop a treatment that does not involve vaccination. The Serb owns controlling shares in the Denmark-based QuantBioRes. He reportedly acquired the shares in 2020.

The tennis world No. was deported from Australia earlier this week following a cancelled visa due to his unvaccinated status.

His position of shareholder in the major biotech firm was confirmed to Reuters by QuantBioRes CEO Ivan Loncarevic. According to Loncarevic, even though the company focuses on treatment instead of vaccination, Djokovic is not against vaccinations.

This is in stark contrast to Aus Immigration Minister Alex Hawke’s reason for deciding to cancel the Serb’s visa for a second time. Hawke said this week the world No. 1’s presence in the country posed civil unrest because of his status of anti-vaxxer.

QuantBioRes has researchers based in Denmark, Slovenia and Australia. This according to Loncarevic, who emphasised several times that the company was working on developing a treatment instead of a vaccine. He said QuantBioRes later this year intends to launch clinical trials for a peptide for warding of infection. The trials will be conducted in Britain, he said.

Djokovic, meanwhile, may also have to miss out on this year’s French Open at Roland Garros. The French government announced on Monday that all athletes competing in the competition will have to present local authorities with proof of full vaccination in order to secure a visa.