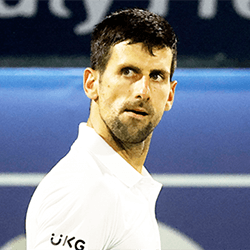 It has now been confirmed that despite tennis world No. 2 Novak Djokovic having remained placed on the list of competitors for Indian Wells, he will not be permitted to compete.

Djokovic will have to sit out of Indian Wells as well as the Miami ATP Masters 1000 tournament after the CDC this week ruled that he won’t be allowed to enter the US while remaining unvaccinated.

The Serb announced the news via a statement on Wednesday. He said while he was indeed listed to play in the Miami Open and the BNP Paribas Open at Indian Wells, he had anticipated the unlikeliness of being permitted to travel to the United States. He also extended his good wishes those who will be competing in the tournaments.

Not unlike the 2022 Australian Open, the Serb’s absence from the lineup for Indian Wells means it will likely be a lopsided competition. Due to move into Djokovic’s spot is the 33rd seed Grigor Dimitrov.

The latest setback means Djokovic has now had to withdraw from three big events this season so far. This also created the space for Spaniard Rafael Nadal to make it to a record 21st Grand Slam title ahead of the Serb.

He is however likely to be seen in action in France’s Monte Carlo Masters, which will be played in mid-April. France’s vaccination restrictions are expected to be lifted on March 14. This also means fans are likely to see him back in action at this year’s French Open.