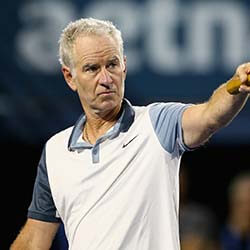 John McEnroe has become just the latest of many to question Brit Emma Raducanu’s decision to change coaches following her fairy-tale US Open victory.

Raducanu split with youth coach Andrew Richardson immediately after she beat Canada’s Leylah Fernandez in the 2021 US Open final at Arthur Ashe Stadium. She has since appointed Torben Beltz as her new coach. Beltz is most famous for coaching three-time Grand Slam singles winner Angelique Kerber to greatness.

According to seven-time Grand Slam champion McEnroe, it makes no sense to him that Raducanu would dismiss the same coach that had helped her to her first US Open win. And his words appear to ring even more true now that Raducanu has suffered an early second-round exit at the Australian Open.

McEnroe mid-2021 attracted intense criticism when he suggested that Raducanu’s fourth-round Wimbledon exit due to breathing difficulties had been the result of the occasion having been too overwhelming for the young Brit. He has however stood firmly by his opinion ever since.

He has however recently said that he continues to root for Raducanu as she fights to establish herself as a worthy contender as part of the women’s tour. He said while sticking around and playing well for the next decade certainly won’t be easy going for the 19-year-old, she certainly has everything it takes to make it happen.

Following her recent second-round AO exit to Danka Kovinic in three sets, Raducanu will next appear on court at the WTA 250 event in Guadalajara, Mexico.