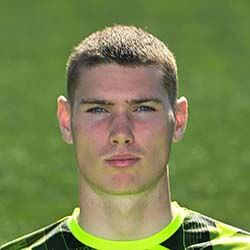 Norwich goalie Dan Barden has been diagnosed with testicular cancer.

According to a statement issued by Norwich City this week, the 20-year-old will be closely monitored during his entire time in treatment.

Barden, too, commented on his diagnosis on Monday, saying that although the last few weeks have been an exceptionally challenging time, a great deal of help and support from colleagues, family, and friends has helped him make it through the diagnosis and days that followed. He also issued a word of thanks to the various hospitals and medical centers where he’d received treatment in recent times, while adding that everybody involved in his difficult journey so far had been an absolute brilliant support.

Barden, who had been on loan with Livingston but who will now take an indefinite break from playing football, said while the initial cancer diagnosis had come as a massive shock, he’s feeling positive following the early diagnosis and positive prognosis received so far. He said he’s full of optimism about the future and that he feels absolutely confident in his ability to beat whatever the disease throws his way.

He also offered a word of heartfelt thanks to the many people he says are supporting him in this time. He said much of this support had come from Norwich City head coach Daniel Farke and Livingstone manager David Martindale.

Also wishing Barden well this week had been Norwich director of sport Stuart Webber, who said everybody at the club wishes the young player a speedy and full recovery.

Social media users found to have directed racial comments and messages at footballers will in future face having their accounts shut down for good, Instagram has announced. A wave of ….

Eddie McGuire is unable to eradicate systemic racism at Collingwood and should as such resign from his role as club president – with immediate effect. This was the gist of ….