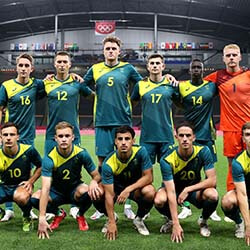 Australia’s Olympic Football contingency has been admonished for poor behaviour put on during a flight back home from the Tokyo Olympics. While Football Australia has reportedly imposed sanctions on the wrongdoers, the governing body has not made public what those sanctions are.

The incident in question happened less than a week after Rugby Australia gave 13 of its members formal written warnings for their over-indulgent drinking habits on the same flight back home from Tokyo.

A recent statement by Football Australia confirms that action was being taken to “address” the behaviour onboard the flight – specifically so as to ensure the incident isn’t repeated in the future. The governing body apparently also issued formal apologies to both Japan Airlines and the Australian Olympic Committee for the players’ bad behaviour during the flight.

Football Australia CEO James Johnson has however described the governing body’s refusal to make known the nature of the sanctions as part of the organisation’s “duty of care” to its players. The names of the wrongdoers will reportedly also not be made known.

Johnson was however quick to add that the football governing body has over the course of the past 10 days made known “stronger” measures that will apply to future trips – measures that are reportedly indicative of Football Australia’s commitment to improving the “culture” within its squads.

According to Johnson’s statement, the Olyroos members involved in the incident were only involved by way of “collateral damage”, and not to the extent previously reported.