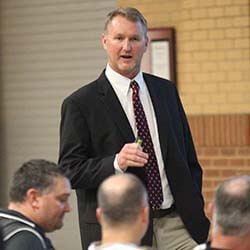 Lambert football coach Tommy Watson has announced his decision to step down after only two seasons coaching the Longhorns.

Watson also said he plans on accepting the role of head coach with Harris County.

Commenting on his decision this week, Watson said pulling the plug on his time with the Longhorns had been no easy decision.

Watson was appointed to lead the Longhorns on Feb. 12, 2020, and has since led the team to their first Playoff appearance in five years. He went 7-4 in 2020 before taking the bow to state champions Collins Hill in the first round of the Playoffs, 56-13.

According to Lambert director of athletics Drew Ferrer, the team hopes to appoint a replacement by at least the spring.

Ferrer commended Watson on a job well done during his time in charge of the Longhorns. He said Watson has left the team in great shape for a future coach to work with going forward.

Watson graduated from Upson-Lee in Thomastown and took his first job with the Knights as head coach from 2008 to 2013. He said the move to Harris County will allow him the chance to be closer to his family.

His arrival in Suwanee had been after a 0-10 season in 2019, and a disappointing three consecutive losing seasons for the Longhorns. He saw the Longhorns to their first regional game victory in three years when they beat Forsyth Central 43-42 upon his arrival.

Watson said this week he felt proud of everything he and the team had achieved.