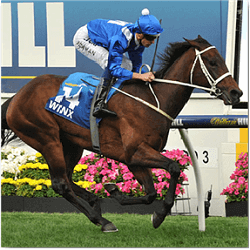 If you indulged your love of online sports betting with a few Cox Plate bets, the time has come to see how you fared. The most exciting race of the day is, of course, the Cox Plate itself, but there are 9 other races besides this eponymous second-to-last sprint.

First was the Inglis Banner Plate, where most of the field was making their race debut. Azazel, a favourite among online sports betting experts, was ridden to victory by Luke Currie. Trainer Tony McEvoy has said he has a strong team of two-year-olds, which is something punters should take note of long after the dust of the Cox Plate bets has settled.

The City Jeep Handicap, run second, and the Crystal Mile, run seventh, were both very even fields. The spoils were taken by O’Malley (despite broken bones!) and The United States respectively. The third race of the day drew a big field, with Sweet Sherry overcoming a disappointing start to take the title.

For the fourth race of the day, the Red Anchor Stakes, most punts were on Ken’s Dream or Archives, and online sports betting sites were predicting a head-to-head battle between the two. If you put your money on Archives, you backed the winner! Race 6, the Moonee Valley Fillies Classic, was similarly anticipated to be between two contenders; I Am A Star and Sezanne. Unlike in the Red Anchor Stakes the victor was a surprise; Nurse Kitchen, trained by David Brideoake, crossed the finish line ahead of anyone else.

Lady le Fay was the clear favourite to win the fifth-billeted Merlin Garage Door Openers Stakes, but if this is where you placed your Cox Plate bets for this race, you’re going to be disappointed. Kaniana, trained by Darren Weir, came first.

Race 8, the Moonee Valley Cup, was predicted to go to Prince of Penzance; he placed 2nd last year and went on to win the 2015 Melbourne Cup, but in the end it went to Grand Marshal. The tenth and final race of the day was the LUCRF Super Vase Stakes, which is considered a good lead-up race to the Victoria Derby. With that in mind, punters should pay serious attention to Sacred Elixir. The experts’ favourite ended up taking the Cup, making the many fans that had backed him very happy.

All eyes were on Race 9, the Cox Plate, to see if Winx would become the second mare (Sunshine was the first) to win back-to-back Plates after she took it home in 2015. Other contenders including Hartnell were in fine form, but Winx was the eventual winner and cemented her place in history.

Regardless of what the outcome of your Cox Plate bets, there are still plenty of other wagering opportunities on offer. Head on over to the betting sites recommended by australiansportsbetting.net and try your luck!