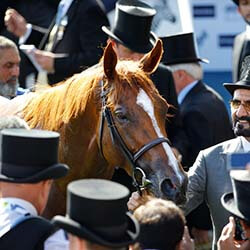 James Cummings’ superpower horse racing stable Godolphin has snapped up two great riders for the upcoming $3.5 million 1200m Golden Slipper event. The stable has a total of four horses qualified for the event and ranks among the top sixteen entries in training in terms of the order of entry.

Todman Stakes champion 1st-place finisher Anamoe is exempt from the Golden Slipper canvass, while Pago Pago Stakes nomination Ingratiating now ranks atop the order of entries for those not ballot-exempt.

Secured to ride two members of the champion Golden Slipper team for Godolphin trainer James Cummings are Damien Oliver and Rachel King. Cummings has not yet let the cat out the back regarding which rider will be jockeying which horse.

Anamoe currently ranks at a $9 chance with TAB for the big event, while Ingratiating is pegged at $15. Ingratiating is however the firm $3.50 field favourite for this Saturday’s Pago Pago Stakes, while their fillies are in the Market for the Magic Night Stakes.

While Oliver had ridden Anamoe in his initial four starts prior to the colt’s recent Sydney debut in the Todman Stakes, King won on Anamoe last week and will this coming Saturday ride Ingratiating while Oliver is all set to compete at The Valley in the All-Star Mile.