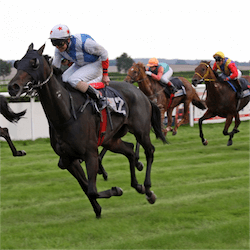 Friday offers Australia’s online sports betting fans Spring night racing to punt on at Moonee Valley. The feature race attracting the Melbourne faithful will be the AJ Moir Stakes, a 1000m Group 1 weight-for-age sprint with prize money of $500,000. It’s often a good race at which to spot strong contenders for Melbourne Cup Carnival races later in the year.

A field of 17 had been confirmed for Friday night’s race, with 4-year-old entire Russian Revolution, sired by Snitzel, the favourite at $3.30. Over the distance, his draw at Barrier 14 may not be an issue. Second-favourite is 3-year-old filly She Will Reign at $4.00, after racking up an impressive record of 5: 4-1-0 in a year. At $8.00, 6-year-old mare Sheidel is also worth considering, with the other 14 entrants all offered at above $10.00.

Testing the stayers on Friday night is the Gr. 2 Bill Stutt Stakes for 3-year-olds. Run over 1600m, or one mile, at set weights for a purse of $200,000, it’s seen as a prelude to the Caulfield Guineas later in October. The favourite is Showtime, at $3.30, but Azazel is close behind at $3.70; both colts were also sired by Snitzel. Masculino is the only other colt in the field of 12 at odds below $10.00.

The other mile race on Moir Stakes Night is the 1600m Gr. 2 WH Stocks Stakes, for total prize money of $200,000. It’s a weight-for-age race restricted to mares, which is helpful later in the season when considering the form for the mares-only Myer Classic. New Zealand 4-year-old I Am A Star is the $3.10 favourite, with Hell Or Highwater at $4.20, Montoya’s secret at $9.00 and Lizzie L’Amour, drawn at Barrier 1, at $9.50.

The race that is going to test the stamina of the stayers at Moonee Valley on Friday night is the Gr. 3 JRA Cup, a quality handicap with a purse of $200,000, run over 2040m. Betting sites are less emphatic about the favourite in the 13-horse field, with 6-year-old gelding Star Exhibit at $4.40, and four other horses offered at below $10.00.