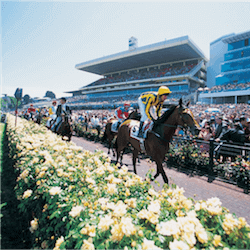 German eight-year-old Almandin, who finished a disappointing 12th in the Melbourne Cup after starting the race as second favourite, is top of the betting for the Sandown Classic on Saturday, 18 November.

The gelding, drawn in Barrier 1, is offered at $2.60 on online betting sites, with Big Duke and The Taj Mahal, at $3.40 and $3.70 respectively, his closest rivals in the eight-horse field.

The Classic is the last of the great stayers’ races of the Melbourne Spring Racing Carnival, now run under sponsorship as the Zipping Classic. The 129-year-old Group 2 weight-for-age race is run over 2400m for total prize money of $300,000.

Sandown hosts an impressive card on Saturday, and the $250,000 Gr. 2 Sandown Guineas for three-year-olds run at set weights over 1600m should get plenty of attention from punters too. Beau Geste, the Irish colt with a career record of 6: 2-0-2, is the current favourite at $4.20, but Snitzepeg is breathing down his neck at $4.60.

There’s more action from the ladies in Perth on Saturday, when Ascot hosts the WA Champion Fillies Stakes. It’s a $200,000 Gr. 3 race at set weights for three-year-old fillies over 1600m, and the 14-horse field includes the promising Mikimoto, unbeaten in three starts.

Two more Gr. 3 quality handicaps on the Ascot card for 18 November are the Colonel Reeves Stakes and the RJ Peters Stakes. Both are worth $150,000 in prizes.

The Colonel Reeves is an 1100m sprint, and betting fans will be keen to see how four-year-old mare Dainty Tess shapes up, after she won the Prince of Wales Stakes over 1000m at Ascot two weeks ago.

The RJ Peters Stakes over 1500m is often seen as a traditional precursor to Perth’s summer racing highlight, the Railway Stakes a week later. It has a field of nine this year.