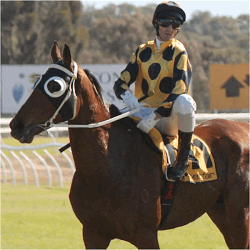 Vote for Lust, or Lusty, is Australia’s worst racehorse. He has had over 90 starts, has placed in just enough of them to give his owners hope, and the rest of the time has just been useless. He is finally retiring just before his 100th start due to a hoof abscess, which really was just the last straw.

Lusty has had a long and illustrious career, depending on your perception of the word illustrious. He has had over 90 starts, making appearances at many different racetracks. John Castleman, who despite Lusty’s terrible record is actually well respected on the racing circuit, trains him.

Lusty has placed before; let’s just get that clear. These placing however were in two horse races, for horses that had never won anything. The winner galloped past the winning post with Lusty ambling in behind at a canter a while later. But they do count as placings. On every other tour he had come either stone last or very close to it. Castleman says that he does win some races at home, and can be coaxed into a gallop, but not very often. If he could just enjoy the outing with a beer and a sandwich he would be much happier. All of this racing nonsense doesn’t appeal to him.

Lusty is still famous though. As the polar opposite of undefeated mare Black Caviar he has quite a following. He has his own Twitter and Facebook account with over 700 followers. Even at his actual races, the crowd turned up to see their anti-hero fail spectacularly. He is everyone’s mate says Castleman, and punters still bet on him, mostly for fun though.

If Lusty were a human he would be the guy in pub that everyone greets. He was used to pony the more jittery racehorses, calm the youngsters down when they were being backed, and just hang around in general making everyone feel better. There were some glimmers of hope at the beginning of his career that he may actually do something, but those faded quite quickly. He seemed to be good at wet weather, having the stamina to simply plough through, but that never amounted to a win or even a place with more than two horses in the race.

There was the suggestion that he challenge Black Caviar in a race. Which would have completely befuddled the super mare although it would have been highly entertaining to watch.  He was even ridden by champion jockey Glenn Boss who has won uncountable races including the Melbourne Cup a few times. Lusty still didn’t perform, running at the back with his head in the air looking unimpressed. In his last race he came a suitable stone last, twelve and a half lengths off the draw.

Castleman was going to keep starting him until his 100th start, and then throw him a party, but a hoof abscess put a nail in those plans and was simply the last straw. Lusty now belongs to Castleman’s granddaughter as a hack and possibly a recreational jumper, which will surely suit him much better, or so one hopes.