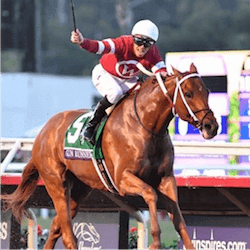 Breeders’ Cup Classic winner Gun Runner is odds-on favourite to win the Pegasus World Cup at Gulfstream Park in Florida on Saturday, January 27. The stallion will be retiring to stud after his shot at the richest race in the world, which is celebrating only its first anniversary. Arrogate won the inaugural race last year.

This year, with prize money ballooning from US$12-million to US$16-million, Gun Runner comes into the 1800m race off a comprehensive win in the 2017 Breeders’ Cup Classic at Del Mar Racetrack, California, on November 4. He finished two-and-a-half lengths ahead of the field, including Arrogate in a dead heat for fifth.

A win at the Pegasus World Cup would end the four-year-old’s career on an impressive 12 wins off 19 starts, along with three seconds and two thirds. Online betting sites are offering punters between $0.66 and $0.99 on Gun Runner winning on Saturday, with his nearest rivals West Coast at around $6.00 and Collected at around $7.00.

War Story Back Yet Again

Loooch Racing Stables owner Ron Paolucci is used to taking a ribbing about his gelding, War Story. Despite never placing in nine starts in Grade 1 races, the six-year-old keeps coming back doggedly, and has several lesser wins and places under his belt. In fact, for a proverbial ‘unsuccessful’ horse, he hasn’t done too badly, raking in more than US$3.4-million in earnings so far.

It would be an ironic twist if the second Pegasus World Cup stuck to the ‘gun’ theme introduced by the favourite, but instead was won by a horse with a lot more military belligerence in his name; especially as it would sky-rocket War Story’s earnings overnight and leave Paolucci with the last laugh.

That’s highly unlikely, given War Story’s odds. And following that theme, punters might just as well put a bet on Singing Bullet, at $100.00, or Fear The Cowboy at $33.00.