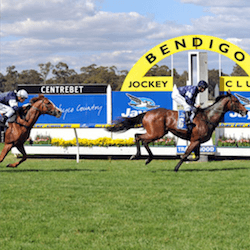 Victoria’s Spring Racing Carnival is set to climax on Tuesday, 7 November, with the Emirates Melbourne Cup at Flemington, but Australian’s online sports betting community have a bumper week of racing until then in which to hone their punting skills. Action starts on Wednesday with the Melbourne Cup Carnival country series heat 8: the $300,000 Group 3 Bendigo Cup over 2400m.

Irish 8-year-olds Qewy and Foundry will both be making the trip upcountry in the hopes of securing final qualification for the Melbourne Cup. Foundry needs a win in Bendigo more urgently; the stallion is currently 29th on the order of entry for Flemington, while gelding Qewy lies 22nd.

Things step up a gear with Flemington’s $1.5-million Gr. 1 AAMI Victoria Derby for 3-year-olds over 2500m on Saturday; a fitting prelude to the $6.2-million Melbourne Cup. One of the serious contenders in early Derby betting, Royal Symphony, took a battering in Saturday’s Cox Plate, so he’s been withdrawn.

So has former favourite Cliff’s Edge, after trainer Weir was unimpressed with the colt’s last race over 2040m in the Drummond Gold Vase at The Valley. Main Stage now leads the Derby betting, at $4.80, with Ace High and Tangled level at $5.50. Sully and Weather With You, at $6.50, are the only other contenders offered at below $10.00.

There are two million-dollar Gr. 1 races on VRC Derby Day, too: the Coolmore Stud Stakes is an iconic 1200m sprint for 3-year-olds, and the Cantala Stakes tests the milers over 1600m.

Invincible Star and Viridene are joint favourites for the Coolmore Stud Stakes, at $6.50. Next is Catchy at $7.00, Houtzen and Jukebox at $8.00, and Formality and Trapeze Artist at $9.00. Tosen Stardom is the clear $4.80 favourite in the Cantala Stakes, but Tom Melbourne, Sovereign Nation and Egg Tart could all challenge.

Bet on these races and more online at Crownbet and see if you can back  winner.