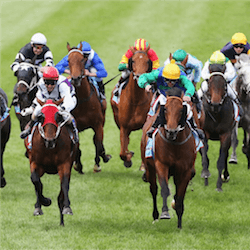 Caulfield Cup Week kicks off in a burst of Moet & Chandon this Wednesday with the Blue Sapphire Stakes as a Caulfield curtain-raiser. The $350,000 race is a 1200m Group 3 sprint for 3-year-olds at set weights over 1200m, and Jukebox and Formality are level favourites at $3.90.

The $150,000 Ladies Day Vase is the other race of note on Wednesday’s card and you can bet on it at Luxbet. This race is a 1600m handicap at set weights and penalties for mares only. In a nine-horse field, Hell Or Highwater in Barrier 3 is the $3.60 favourite, but Prompt Response, starting from Barrier 5, is close behind at $3.80.

Saturday brings one of the highlights of Melbourne’s Spring Racing Carnival: the Group 1 Caulfield Cup over 2400m, an open handicap dating back to 1879 that has seen its prize money bumped to $3.15-million this year.

The betting is being led by Bonneval and Humidor, both at $6.50, although Bonneval still needs clearance to race after picking up a leg injury in last week’s Caulfield Stakes. Admire Deus and Johannes Vermeer are close behind at $7.00, with Amelie’s Star at $7.50.

The week’s racing action finishes up in the country, heading north to Seymour Racecourse on Sunday to show off the course’s $6-million 2016 refurbishment. The main attraction is the $150,000 Seymour Cup, a listed open handicap over 1600m. It usually features a mixture of the stronger horses racing the country circuit and decent city gallopers taking a break from Melbourne in the hopes of less demanding competition.