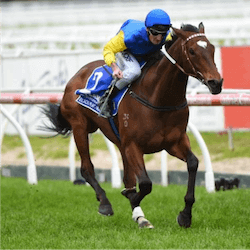 After showing off what a WA galloper could do on the other side of the Nullarbor for two years, Black Heart Bart’s return to Ascot for the Railway Stakes was eagerly anticipated by Perth racing fans. They didn’t see quite the triumphant comeback they were hoping for from the 2015 Lee Steere Stakes winner, but at least the horse that beat him was also proudly Western Australian.

On Saturday, five-year-old local outsider Great Shot hauled Black Heart Bart in during the final furlongs of the Railway Stakes to win the million-dollar Group 1 miler by a neck. It was a great moment for the gelding’s 26-year-old trainer, Rhys Radford, taking his first Gr. 1 win.

Tom Melbourne, like Black Heart Bart well fancied in the Railway Stakes betting, couldn’t haul either of the two in, and finished third.

Some online sports betting fans are tempted to write Black Heart Bart off after his Ascot disappointment. The gelding is now seven years old, and many feel he may not have another Gr. 1 win in him.

However, he has five on his record already: The Goodwood, the Memsie Stakes and the Underwood Stakes in 2016, and the CF Orr Stakes and Futurity Stakes back-to-back at Caulfield within a fortnight in February this year.

He went off the boil and only placed three times in his next six races, which is why trainer Darren Weir decided to spell him early before his return to Perth.

Kingston Town Classic Up Next

Weir is undaunted by Black Heart Bart’s second in the Railway Stakes, and has confirmed he’ll get another shot at taking six Gr. 1s in two years at the Kingston Town Classic, back at Ascot on December 9.

At 1800m, the Kingston is 200m longer than the Railway Stakes, and Weir is confident the extra distance will suit him. It looks like the Blackfriars gelding will be the race favourite; online betting sites are offering him at around $4.50 in futures.