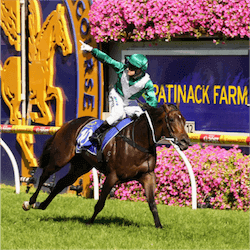 It is too early for Australian betting fans to have the field for the Blue Diamond Stakes on February 25 yet, but they have plenty of chances to study the form of likely contenders as Melbourne summer racing shifts into autumn gear. If trainer Mick Price has his way on Blue Diamond Stakes Day at Caulfield, promising colt Cao Cao will be in contention for Australia’s richest race for two-year-olds.

A notable debut last November in the Maribyrnong Plate at Flemington, where he finished second, was followed by a win in Moonee Valley’s Whiteman Property Plate on November 26. The colt was then rested, until a jumpout on January 31, in which he cruised to first against a field filled predominantly with unraced two-year-olds.

Both his races to date have been over 1000m, so punters will be keen to see whether he can manage the extra furlong in the 1200m fixed-weight Blue Diamond Stakes, which carries a $1.5 million purse. They’ll get the chance to watch him over 1100m at Caulfield’s Blue Diamond Prelude on Saturday, February 11. Some bookies are offering Cao Cao at $17 for the Blue Diamond Stakes, with race favourite Pariah at $7.00.

Malaguerra in Contention for Futurity Stakes

Racing enthusiasts should also keep an eye on Malaguerra at Caulfield in February. Following a win over 1200m at Moonee Valley on January 27 coming back from a break, the 5-year-old gelding now has a career record of 12 wins and 3 places from 23 starts. Trainer Peter Gelagotis wants to try him over seven furlongs, so he will race in the 1400m CF Orr Stakes at Caulfield on February 11.

If all goes well in the CF Orr Stakes, Malaguerra will return for the $500,000 weight-for-age Futurity Stakes, also over 1400m, on Blue Diamond Stakes Day. Gelagotis is adamant he will be the horse to beat, so punters should follow his performance in the Orr closely.

Lindsay Park-owned flyer Faatinah might be worth a punt in the shortest of the three feature races on Blue Diamond Stakes Day: the 1100m Oakleigh Plate, also with a purse of $500,000. The 4-year-old gelding has won three successive starts since resuming this season. Betting fans can check out his form in the 1000m WJ Adams Stakes at Caulfield on Saturday, February 04.