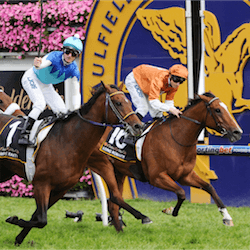 The preliminary field of 36 for Saturday’s $3.15-million Caulfield Cup will be whittled down by at least 15 before final acceptances on Tuesday, but the process already started this past weekend.

Several horses have been withdrawn from Melbourne’s famed Group 1 weight-for-age handicap after poor performances and/or injuries on  Saturday, including English import Francis Of Assisi and Ireland’s Riven Light. Last year’s winner, Hartnell, is also out, and it’s unlikely that Almandin will start, either.

New Zealand mare Bonneval had a disappointing Caulfield Stakes on Saturday, finishing sixth of 11 and sustaining a small tear in her off-hind pastern. However, co-trainers Murray Baker and Andrew Forsman are confident the 4-year-old will be fully fit again in time for the Cup; she will be running with stablemates Lizzie L’Amour and Jon Snow.

Despite a disappointing 10th of 12 finish on Sunday in the Cranbourne Cup, Baker is confident that Lizzie L’Amour can do better over the Caulfield Cup’s 2400m, and she is currently at $34.00 at online betting sites. Jon Snow is at $15.00, while Bonneval remains joint favourite at $6.50. You can bet online at Crownbet, where you’ll get great odds on the race, and so many other events.

The other favourite at $6.50 is Humidor, trained by Darren Weir. The 5-year-old gelding, sired by Ireland’s Teofilo out of New Zealand dam Zalika, last won at Flemington over 1600m a month ago. His last race, over 2000m at Flemington on 7 October, saw him placed third of seven.

Weir’s other two horses likely to make the final Caulfield Cup field are Amelie’s Star, who is also looking like a serious contender and is being offered at around $7.50, and Admire Deus. Although this 7-year-old entire has a proven track record as a stayer in Japan, the Cup will be his first Australian race. Nevertheless, he’s caught the attention of many punters, and betting sites are offering him at around $7.00.

Single Gaze, who finished fourth in the Caulfield Stakes and was looking hungry for a longer distance, could also be worth a punt this Saturday, at $26.00. Should they remain in the final field, Harlem at $9.00 and Johannes Vermeer at $7.00 can’t be ruled out either.