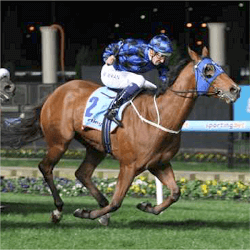 Queensland’s racing veteran horse, Buffering is back in action and looking for a record fourth win at this year’s Group One Moir Stakes held at Moonee Valley. Just a few months ago, it seemed that the talented sprinter might have run his last race and that his competitive days had come to an end. To the surprise of everyone, including his trainer, Buffering is back and ready to prove to the world that he has what it takes to win the 1000m weight-for-age sprint on Friday night.

Headlining the field of nine is the world’s number-one ranked sprinter Chautauqua who is in fine form. If Buffering is to win the Moir Stakes, he must do something that he has never done before. In four previous meetings, Buffering was unable to pip Chautauqua to the post. Chautauqua, who drew barrier five will have Buffering alongside him in lane six. Meanwhile Redzel will start the race from the inside lane, while Extreme Choice will take up the position at the outside barrier.

Earlier in the year, Buffering injured his leg the Chairman’s Sprint Prize leaving Chautauqua to win the Hong Kong race. The injured horse was also found to have blood in his trachea leading to some serious talks about retirement and ending his career. After a good deal of paddock rest and a steady build up routine, the resilient nine-year-old has made a full recovery. Buffering has shown his trainer Robert Heathcote that he has what it takes to compete again.

Both Buffering and stable mate Hopfgarten arrived in Melbourne with Hopfgarten set to run in the 1400 meters Listed Paris Lane Stakes at Flemington on Sunday. In the Moir Stakes, Buffering is known to be a natural frontrunner. He faces some stiff competition from Redzel who also likes to race from the front. Last year, Chautauqua won the Manikato Stakes at Moonee while Buffering only managed fifth place.

In the Chairman’s Sprint Prize in Hong Kong, Chautauqua came storming up from last place to win the race while Buffering faded to last place with injury problems. Friday’s Group One Moir Stakes promises to be one of the most exciting races of the year. Punters and racing fans will have their eye on both Buffering and Chautauqua. The pattern of the race will be Buffering leading the way while Chautauqua makes a classic late charge, and all eyes will be on the Queensland veteran as he gallops his way to what many hope will be a victory.