Buffering Wins Horse of the Year 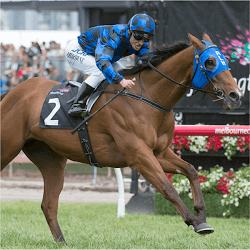 Buffering is possibly the most well known racehorse is Australia’s recent history. He is a bay gelding out of the stallion Mossman and the mare Action Annie. Buffering last ran in Hong Kong at the end of 2016 as an eight year old, against a field of much younger horses. Racing thoroughbreds very seldom race past four years old, or in some rare occasions five years old. Buffering is somewhat of a mythical beast in that he has raced, and won, right up to the age of eight.

Buffering won his first four starts as a two year old. He then went on and was beaten for the first time in the Group two Bollinger Champagne Classic, finishing third against future Group one winners Pressday and Spirit of Boom. His first group class win came at the Roman Consul Stakes at Randwick. On only his eleventh start Buffering ran in his first Group one race, the Coolmore Stud Stakes, finishing fourth on Victorian Derby Day.

From there he came up against some serious names in the sprinting world including Black Caviar, Sepoy, Foxwedge, Hay List and Sea Siren. He was beaten by all of these, but being a young upstart, Buffering still had to come into his own. He proved to be a horse that had to mature before he really entered their elite class. Of the first 17 Group 1 races he competed in, he placed in ten. His six year old season saw him winning his first group one race. His six year old season went on to win Group one races at both of his next starts, winning the VRC Sprint and the Winterbottom Stakes in 2014.

His seventh season was plagued by injury and illness and saw most of it either in the paddock or on stable rest. This seemed to do him good however, as he returned to the track to win the Moir Stakes, making him a three time winner.

Buffering has had a career which any thoroughbred, or trainer would be extremely proud of. He has won a staggering 50 million Australian dollars in prize money over the eight years in which he raced.  His career form is 19 wins, 9 seconds, 8 thirds from 52 starts, more than any other horse in recent history except possibly the incredible Black Caviar. Buffering was voted Queensland Horse of the Year, beating other group one winners Miss Cover Girl and Eagle Way. He was also awarded the honour of being voted four year old and Older Horse of the Year 2016.

Buffering was a rival of the retired, undefeated champion sprinting mare Black Caviar. He never did beat her but has outlasted her on the track and gone on to earn a similar amount of prize money and a large number of Group 1 races himself. Buffering has competed with many of the greatest modern day Australian sprinters throughout his career including Black Caviar, Chautauqua, Hay List, Sepoy, Foxwedge, Terravista and Lankan Rupee, a claim that no other horse can make.