Chautauqua Out of Oakleigh Plate 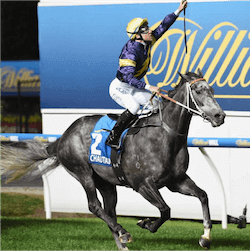 The scratching on Wednesday of Team Hawkes’ Chautauqua from Saturday’s Oakleigh Plate at Caulfield did more than bring the weights up in all the horses that remained in the field; it also left sports betting fans a little put out.

Many would have been keen to back the 7-year-old gelding in the famed Group 1 Melbourne sprint, who was coming back from a 14-week spell and had finished third of nine in barrier trials on February 15.

His last race, following another four-week rest, was the million-dollar Darley Classic at Flemington on November 11 last year, in which he finished fourth of 13.

His last win was at Royal Randwick in April last year, in the 1200m Group 1 TJ Smith Stakes, when he rocketed from behind in the final 100m to beat English and Fell Swoop by a nose, right on the line. It was his second win in the Stakes; the first came in 2015.

Prominent Career on the Wane?

It has not been revealed why the Hawkes’ training team, John and his sons Michael and Wayne, pulled Chautauqua from the Oakleigh Plate, although his barrier trial result may have been less impressive than they’d hoped for. He would have been carrying top weight in the Oakleigh Plate too, which may also have factored into the decision.

Punters would certainly have considered him a contender in the Oakleigh Plate; his career record is 32: 13-7-4, and he has some great Group 1 sprints in his win record, including the Chairman’s Sprint Prize and the Lightning Stakes.

Some betting fans are worried that his withdrawal from the Oakleigh Plate signals a stellar career winding down, however. In his eighth year, does the gelding have any more Group 1 wins in him?

It looks likely at this point that Chautauqua will be in the field for the 1300m Gr. 1 Canterbury Stakes at Randwick on March 10, so perhaps he’ll answer the sceptics in Sydney.