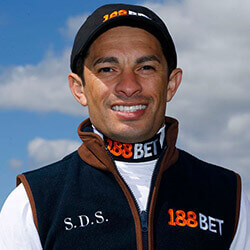 It has recently been revealed that Silvestre de Sousa will be partnering with Dee Ex Bee for the Dubai Duty Free Irish Derby, which will be taking place at the Curragh.

It’s not the first time the two have ridden together, and De Sousa led the colt to second place in the Investec Derby at Epsom, being beaten only by Masar. Dee Ex Bee’s trainer, Mark Johnston turned to the famous jockey after the horse was supplemented for the Irish Derby.

Before De Sousa was chosen to ride Dee Ex Bee, who is owned by Sheikh Hamdan bin Mohammed Al Maktoum, William Buick was set to take the reigns. These plans have changed for Buick, however, and he will now be riding Old Persian after Sheikh Mohammed’s Godolphin operation decided to supplement Charlie Appleby’s three-year old after his victory in the King Edward VII Stakes at the Royal Ascot.

Johnson told reporters that Buick had originally planned to ride with him but after Charlie Appleby’s announcement; they decided to switch Buick to Old Persian, and Dee Ex Bee back to De Sousa. He went on to say that everything that has happened since Epsom has been perfect for their team.

He also added that rain would have helped them, but they don’t need it, and that the team is happy to get going as the Dubai Duty Free Irish Derby winds up to start soon.