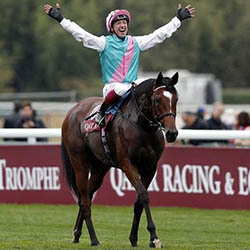 Wonder mare Enable scored a 12th successive victory as she triumphed in what proved to be her best race yet while racing on British soil in York. After leading the five-year-old to a clear-cut win in Magical’s Yorkshire Oaks, Jockey Frankie Dettori was in tears. At the Prix de l’Arc de Triomphe on 6 October, Enable will now aim for a record fifth win. It was a 10th win for the 1-4 favourite at the top Group One level.

48 year old Dettori clocked up his 14th Group One year’s triumph, just two shy of his 2001 personal highest score. He stated that it may very well be Enable’s last race within the country, and that it was unique. Dettori sent his horse directly to the front with just four participants in the race over almost a mile and a quarter and set the pace for the rest of the group. Magical, coached by Aidan O’Brien, proved to be a challenge in the bottom half of a mile but Enable was unstoppable, winning by a length of two and three quarters.

Adding to his statement, Detorri said that he’s feeling sentimental because she’s such a nice horse, and that the turnout was great. He continued. John Gosden, who coaches for Saudi Arabian ruler Prince Khalid Abdullah, stated that they couldn’t be happier, and that Enable has an amazing, competitive mind. 853 days ago, Enable winning over £ 9.5 m for the second outing of her career.