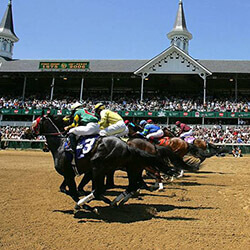 Horse racing and horse betting have gone hand-in-hand for the better part of 200 years, and every year millions of people around the world try their hand at the various events that take place internationally. But the Kentucky Derby has stood above all for a number of years; being the ultimate go-to event for horse race betting.

One of the reasons for this is its international coverage – the Derby has widespread popularity, and it’s always been easy for punters to find a bookmaker offering bets for the event. Secondly, the Derby has always had a massive betting pool from the many novice gamblers who sink a lot of money into the overall pool, making potential wins seem like a viable way to walk away incredibly rich.

The problem with this, however, is that the odds for a race are often highest for the underdog, and in a trend recently discovered, almost all the favourites for any given race are generally dominating the competition.

Last year, for example, Always Dreaming was the fifth favourite in a row to beat his opponents, coming in with a total worth of $11.40 for a $2 bet. It’s this predictability that has caused some concern, as it’s now becoming more and more difficult to earn any appreciable winnings from a single race – which would usually be won through an underdog coming first.

The trend has caused some problems for those that like to bet, and whether it’s mere coincidence or if there’s a more to it remains to be seen.