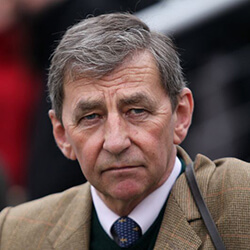 Ferdy Murphy, who coached ten Cheltenham Festival winners and three Scottish Grand National winners, has died at 70 years of age. In 2013, Murphy moved from his home in North Yorkshire to France, and had been diagnosed with cancer four years ago. A former stable jockey for Paddy Mullins, his Cheltenham winners included French Holly, Paddy’s Return, and Poker De Sivola.

Davy Russell released a statement, saying that it was unfortunate to hear about the passing of Ferdy Murphy, who was one of the all time greats of the racing world. He added that he had been an enormous influence on both Russell’s work and home life, and his thoughts and prayers are with his family at this difficult time.

Cheltenham Gold Cup-winning jockey Andrew Thornton, who rode French Holly to a 14-long victory in Cheltenham’s SunAlliance Novices’ said Ferdy was a charismatic person and that he was a real horseman because he truly educated those that he trained, adding that he was a great person to asking questions and for training world-class jockeys.