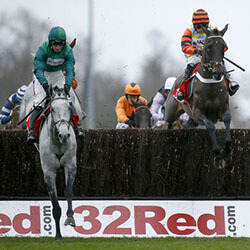 Presenting Percy will be missing the 32Red King George VI Chase that’s set to take place at Kempton after connections decided against allowing the Cheltenham Gold Cup favourite for the Christmas event. Owner Phillip Reynolds, along with Trainer Pat Kelly, had been contemplating paying the large entrance fee, but Presenting Percy ultimately did not make an appearance among the other 11 six-day confirmations.

Brilliant Altior was among others that were taken out of the Christmas show-piece, with Nicky Henderson instead opting to rely on last year-s winner and ante post favourite Might Bite. Betfair Chase victor Vristol De Mai is still on course of participating in the event, as well as the Colin Tizzard-trained duo Native River and Thistlecrack, who finished second and third respectively at the Haydock event.

Waiting Patiently, who has been absent from any professional racing since winning in the Ascot Chase earlier this year in February, will be riding alongside Paul Nicholls-trained pair Clan Des Obeaux and Politologue, who are among the most notable contenders taking place this year.

Shattering Love will be taking up the role of sole representative of Ireland in the absence of Preventing Percy, and will be the only mare left in the event. Double Shuffle and Tea for Two, respectively second and third 12 months ago, will be running alongside Gold Cup winner and hero Coneygree. Chase and Unibet Christmas Hurdle have also been reopened after six and eight entries were received.