All About Flat Racing In Australia 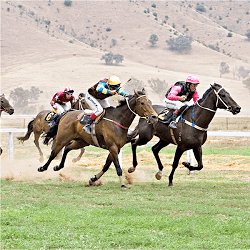 Flat Racing Continues to Thrive Down Under

Flat racing in Australia began in the 1700’s when a horse called Old Hector was imported onto the continent from America. A stallion called Northumberland who was from Great Britain followed him. From there the industry has blossomed into a multi-billion-spectator sport, which amassed 14.3 billion dollars in wagers in 2010 alone. It continues to grow in both bloodstock as well as interest.

The first two sires, Hector and Northumberland were, in fact, Arabian stallions. Arabians in the UK as well as Australia founded the thoroughbred breed, and some of those bloodlines can still be found today. The first mare to be registered by the Australian General Stud Book of recorded Thoroughbreds was Manto whose family is still producing winners. In 1826 the Thoroughbred stallion Peter Fin, and mares Cutty Sark and Spaewife, were imported from Great Britain and can also still be found in current bloodstock. Manual was the first Australian sire to have raced on both the flat and over hurdles, producing a line of winners in both disciplines.

The most famous racehorse of the 1800’s was a stallion called Carbine. He won numerous races all over Australia before becoming a prolific sire. His progeny are still racing today and winning, including great horses such as Tulloch and Benborough. These two were champions of the 20th century, with more recent champions including Black Caviar and Makybe Diva.

By 1810 horse racing was a well-established sport with a number of clubs and races happening all around Sydney. Betting on flat racing was a popular pastime of both the workingman and the upper class. Racing had yet to spread to the rest of Australia, however, as transporting thoroughbreds was relatively difficult and time consuming. To transport a racehorse one would have to use a train, as thoroughbreds were not suited to long rides over rough terrain.

In Sydney the first official race meeting was organized by officers of Governor Macquarie’s visiting 73rd Regiment and held at Hyde Park, in October 1810. The Australian Jockey Club had its home base at Homebush from 1842 to 1859, before moving to Randwick in 1860. Randwick was an established track, which held races on a regular basis the most popular being the St Ledger Stakes, which moved from the old track at Homebush. Country Clubs were permitted to race in 1883, helping to spread thoroughbred flat racing to other parts of Australia

Today the Australian thoroughbred breeding industry is one of the biggest in the world behind the US and Britain. It produces thousands of horses each year, a number of which race around the globe. The earliest breeders of note included men of historical significance such as Robert Campbell, Lieutenant William Lawson an explorer, John Macarthur a wool pioneer, John Piper a military officer and Dr D’Arcy Wentworth. Their horses have shaped Australian bloodstock as we know it today, and helped to create internationally winning horses.

Aussies can look forward to the TABtouch Perth Cup Day that runs on the 31/12/2016, and in 2017 there are a number of flat races that include: