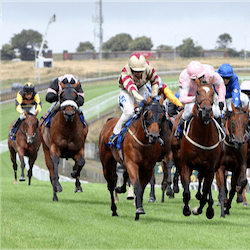 Spring Carnival Racing in Victoria isn’t confined to Melbourne. One of the major country cups comes up on Wednesday at Geelong Racecourse. The $300,000 Group 3 Geelong Cup, an open handicap over 2400m, is often a useful race at which to pick contenders for the Melbourne Cup that follows closely in November.

In Her Time and Chautauqua, respectively at $6.00 and $7.00 in the betting, could also be contenders.

The $3-million Gr. 1 weight-for-age WS Cox Plate over 2040m will be Moonee Valley’s Saturday highlight. Last year’s winner, 6-year-old champion mare Winx, is back as the favourite, at $1.16, with the nearest contenders in the antepost betting, namely Folkswood, Gailo Chop and Happy Clapper, all at $17.00.

Then there’s the 1600m Gr. 2 Inglis Cup, for 4-year-old and older mares, and a testing sprint for the youngsters: the Gr. 3 Red Anchor Stakes over 1200m at set weights and penalties for 3-year-olds.