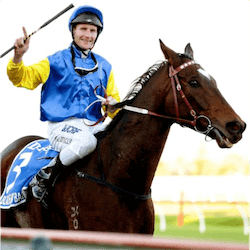 The Goodwood is one of the most popular sprints on the South Australia Jockey Club’s Autumn Carnival, so Saturday’s 1200m race at Morphettville is attracting lots of action from Australia’s online betting community. The 2016 winner, 6-year-old Black Heart Bart, is the favourite to win the 2017 race too, at $3.50 and under.

If he was looking good after two back-to-back wins at Caulfield in February, the release of the barrier draws only confirmed the Darren Weir-trained gelding’s favourite status for the Goodwood. The Perth champion will be in Barrier 2 for the Adelaide race, so many punters expect him to have an advantage from the start.

However, he won’t be without competition. With 22 horses accepted for the 2017 Goodwood, there are plenty of other fine sprinters in contention, and some have pretty good barrier draws too.

Two Other WA Horse to Watch

Black Heart Bart isn’t the only superstar to come out of Western Australia. 4-year-old gelding Vega Magic had a cracking 2015-16 season, with seven wins and one second in eight races, and so far he has two wins from four sprints in 2016-17 as well. He is second favourite for the Goodwood, at $6.50, and he is drawn in Barrier 6.

At $20.00, 5-year-old gelding First Among Equals is the Perth galloper who could deliver an upset, after building an impressive record of 11 wins from 25 starts in WA. However, he will first have to overcome a Barrier 16 draw, so he’s definitely a long shot.

Drawn at Barrier 5, Gold Coast mare Secret Agenda is also fancied by many for the Goodwood, at $7.50. The 4-year-old is coming off two successive wins over 1200m: Randwick’s Tab Sapphire Stakes, and Morphettville’s Ubet Classic two weeks ago.

The fourth horse currently priced in single figures for the Goodwood is Malaguerra, winner of last year’s BTC Cup and the Australia Stakes at Moonee Valley in January. The 5-year-old gelding, trained by Peter Gelagotis, is at $8.00 for a win. Drawn in Barrier 9, he could well pose a serious threat to Black Heart Bart’s ambitions.