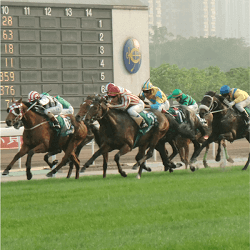 The Hong Kong Cup is a group one flat horse race, which is run annually in Japan at the Sha Tin racecourse. This year locally trained Maurice, whose winning time was an impressive 20:00.95, won the race.

There are certain criteria that a hose has to meet before it can take part in the Hong Kong Cup. the horse has to have entered a number of group one races and made over a certain amount of money. The horse also has to be over three years of age. The Hong Kong Cup is currently the richest flat race in the world, attracting hopefuls from all over the world. Horses have to be invited to take part in the Hong Kong cup, and invitation, which comes at the beginning of every year.

History Of The Cup

The Hong Kong Cup was initially called the Hong Kong Invitation Cup and was run over 1800m. At first, it was only open to gallopers from Malaysia, Hong Kong, and Singapore, but that changed to include horses from Europe in 1990, followed by those from the United States in 1991, and Canada and Japan in 1992. These days’ horses from almost all over the world, including South Africa may take part, as long as they satisfy the entry criteria. In 1999 the race was awarded group one status and the distance was increased to 2000 meters. This put it in the category of a staying race, rather than a sprint. The Hong Kong Cup forms the final leg of the World Series Racing Championship. This takes place in nine countries over four continents, consisting of twelve races. The Australian leg of the Cup is the WS Cox Plate held at Mooney Valley in October.

Australian and New Zealand horses were successful in the early running of the Hong Kong Cup with Grey Invader in 1989, Kessem in 1990, Romanee Conti in 1992 and State Taj in 1994, all winning. All but State Taj were New Zealand horses, however. Recently New Zealand and Australian horses have not done so well in the race, possibly due to strict quarantine and traveling stresses.

One of the most famous Australian horses to enter the Hong Kong Cup was Criterion. Criterion has been nominated as one of the champion stayers for 2016. Unfortunately, he did not do very well in his first attempt, running fifth to some very intense competition from all over the world. 2016 will be Criterions third Hong King Cup in a row, more than any Australian horse previously. Chautauqua is another Australian horse to enter the race in the past, although the horse had a very disappointing run.

In total, there were a few promising Australian entries in 2016, including Takedown and Criterion, but neither managed to cross the finish line in first place.