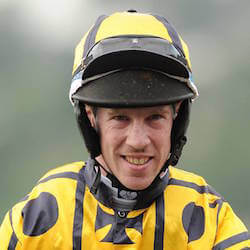 Any punters hoping to back jockey John Allen in the Australian Cup, or any of the races at Flemington’s Super Saturday on March 10, including the Newmarket Handicap, are out of luck. Allen is serving a suspension that puts him out of the running for the Australian Cup and several meetings to come.

Michael Dee is also in hot water; like Allen, for an infringement on the country racing circuit – but his penalty has been confined to provincial meetings.

The axe fell on Wednesday, after officials reviewed both jockeys for two provincial races on the day – Allen in the 2000m Stawell Glass Grand Handicap at Stawell, and Dee in the 2400m Australian Trainers Association Maiden Plate at Bendigo.

It should have been a triumphant day for Allen in the run-up to the Australian Cup: he rode two winners at Stawell on Wednesday. But in the second of those, aboard Bringit in the final race on the card, he laid himself open to a charge of careless riding.

It started on the final turn, when Bringit, bunched in on the rail in fifth, made a break. Allen allowed the stallion to shift out and impede Hello My Dear, ridden by Daniel Moor, forcing Moor to check; Hello My Dear then finished last.

Souring his win, Allen was hit with an eight-meeting suspension for careless riding. This means he’ll miss the whole of Flemington Super Saturday on March 10, including the Australian Cup.

Dee Too Heavy with the Whip

Dee faced a stewards’ enquiry for his race aboard favourite Dazzling Rain in the Maiden Plate at Bendigo. He was caught using the whip at least six times before the 100m mark in the 2400m race, and suspended for six meetings.

However, that penalty only applies to provincial meetings, so he could still be up for several races at Flemington on Super Saturday.