Invader Heads Up The Odds At Champagne Stakes 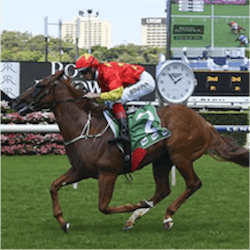 Invader will start at odds-on favourite for Saturday’s Group 1 Champagne Stakes. In the early nominations, Frolic was sitting as second favourite but has since been pulled out of the race. Trainer Michael Freedman was aiming to give Frolic a true fairy tale finish in Australia before packing up and heading to Hong Kong. But it was not to be. The news broke late Tuesday afternoon that Frolic would head back to the paddock and not show in the Group 1 mile race.

Speaking to the press, Freedman said that they had just six runs of preparation with the last three being on heavy tracks. After weighing it all up, Freedman decided that heading back to the paddocks was the best thing to do. The news of Frolics departure would certainly bring a smile to Peter and Paul Snowden who already have Invader in as a favourite at odds of $1.90. Once the final fields are declared, his odds are set to improve even further.

Frolic Taken Out of Race

Frolic finished seventh behind Invader in at her last start. But for all accounts, it would have been difficult for the horses to make up ground on the day. As such, team Snowden would have been pretty ware of the filly and especially glad to see her go. Freedman will start packing things up and close the door on his stables after doing a few show races and then to Hong Kong for next season’s training.

Freedman returned to Australia in 2016 after doing an eight-year run in Singapore. With one horse left as a runner in Hawksbury, Freedman feels that it’s all a bit of an anti-climax really. Show’em will go into Hawkesbury with a decent crack at the title. Freedman said they will keep a close eye on the runner but his main focus is on preparing for Hong Kong. Meanwhile, Matt Laurie feels he has a good crack at the Champagne Stakes with his young cold Aberro. The colt has come through two runs and looks set to take on the big guns in the Group 1 racing classic.