Japonisme Could Be 2016 Colt of the Year 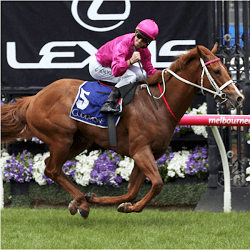 Japonisme in the Running for Horse of the Year

Japonisme is a chestnut gelding that is in the running for colt or gelding of the year 2016. He has had a superb race history so far, running all over Australia against some big names and coming out tops. His trainer, Chris Waller has pointed him at a number of group one races in his three year old season, all of which he has taken to very well, coming home with a number of places as well as a sprinkling of firsts.

Of course, the colt has had a number of spells throughout his career to give him time to grow and strengthen, which seems to have only done him good.

In late 2016 he defeated King’s Troop and Haptic in the San Domenico Stakes, as well as the 2015 Golden Slipper winner Vancouver with a comprehensive half-length margin with the final 600m covered in a smart 33.54. Japonisme shows great speed and staying strength over 1400 meters. He had beaten his stable mate, Press Statement who is also a contender for the 2016 colt or gelding of the year award a number of times over the last year.

Japanisme has become known as an adaptable and genuine horse. He is able to change tactics on the track according to the conditions and his jockeys will, quickly and with no fuss. This was proven at the San Domenico Stakes at Rosehill. His first big win, Japonisme surged past the group one winner Vancouver as well as Godolphin’s Haptic to not only a clear win but a track record too.

Japanisme’s sire, Choisir is from the famous Danehill Danzig line. His sire, Danehill Dancer is a direct descendant of Danehill himself. Choisir is a dual hemisphere winning horse in his own right, winning races in both Australia and the UK. He is the sire of over 710 starters for over 400 winners including 33 stakes winners that have earned over 33 million Australian Dollars altogether. He now stands at Coolmore stud in Australia, although he is a shuttle Stallion which means he travels to the northern hemisphere to service mares there as well.

Japanismne has a bright future ahead of him as a mid distance runner. He does not quite have the staying power for the really long races such as 2400 meters, but over 1200 to 1400 meters his short muscular frame has proven him to be a powerhouse. He still has a bit of developing to do but seems to be a very sound horse with good conformation, which should protect him from conformation- related injuries on the track. If all goes well you can expect to see the chestnut gelding tearing up the tracks all over Australia and possibly all over the world.