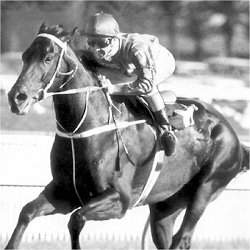 The Horse that Named a Race

Kingston Town was one of those horses that captured not only the hearts of the Australian public but their wallets too. He was the first horse to make over a million Australian dollars in prize money throughout his career, and no doubt made many a punter a pretty penny too.

So famous was he that one of the biggest races in Australia is still named after him today, the Kingston Town stakes at Ascot. This year’s Peters Investments- Kingston Town Classic Day Race was run on the 03 of December and was won by Stratum Star, another horse that’s fast making a name for itself.

Kingston Town was born in 1976 to a mare called Ada Hunter who was a German thoroughbred. His sire was Biscay, who was by the very famous Bletchingly. Kingston Town was a dark bay colt, almost totally black with striking features and very long legs. He ran his first start as a colt, but came stone last. Some horses simply run better as geldings, and obviously, Kingston Town was one of those. He returned as a gelding to begin his career of scorching almost every racetrack he came across. On his second start he came first, with odds of 100 to one, making punters who bet on him very happy indeed.

The horse’s record was 41 starts, for 30 wins and 7 placings. He was the first Australian thoroughbred to win over a million dollars, as well as the only to win a whopping fourteen group one races. His early career quickly drew the attention of punters not only in Australia, but all over the world. Those that were quick to bet on him in the early races were richly rewarded. He was so fast, and won so many races however, that his odds were quickly very high, rendering bets on him not very lucrative. Punters still bet on him time and again however, as he produced win after, and if he didn’t win then he placed. Many a difficult wager was won, putting bookies solidly unimpressed.

Kingston town’s most famous race was the 1982 Cox Plate. Not just for his incredible victory, but for the announcing during the race too. The third Cox Plate in under the horse’s belt was run when he was already six years old. The announcer, Bill Collins, famously incorrectly predicted during the race that Kingston Town couldn’t win. This was hastily revised to the fact that he might win yet, the champ. And then the famous words:  Kingston Town’s swamping them, Kingston Town, as the horse swept down the home straight leaving the rest of the field looking like donkeys in his wake.

Kingston Town was plagued with leg issues. After his last race in 1982, the same year as the famous Cox Plate, he was sent to America to try and overcome his lameness. It was unsuccessful though and he never really recovered. His owners did try a comeback with the gelding in 1984, but he was scratched before he even ran. He was eventually put down in 1991, after damaging his legs playing with a paddock mate in the field.

Every year when the Peters Investments-Kingston Town Classic Day rolls round Aussie fans remember the horse that spurred a legendary race that lives on.