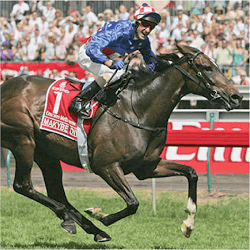 It’s not only colts and geldings that are superstars of the track in Australia. Makybe Diva is a 1999 mare that won the Melbourne Cup no less than three times, which has never been done in the history of Australian racing. She also won the Cox Plate.

Makybe Diva is the highest stakes earner in Australasian horse racing history, winning more than 14 million Australian Dollars in her entire career. She finally retired in November 2005. She remains one of only five horses to have won the Cup more than once, and the only mare on that list. She is also one of only 14 female horses, 11 mares and three fillies to have won the Cup.

Makybe Diva was bought in utero by John Foote, who is Tony Stantic’s bloodstock agent. Her dam, Tugela, was sent to Dick Fowlston’s Britton House Stud in Somerset to board before being sent on to Australia. Tugela foaled down at one minutes past midnight, still in Britain making Makybe Diva actually a British mare. She was born in March of 1999, which is unusual as thoroughbreds are usually born at the end of the year. Makybe Diva was offered for sale at Tattersalls, but failed to meet her reserve price so went back home.

Makybe Diva began her racing career late in her three-year-old season, and ran only her first few races as a three year old, not burning down any records. Her racing resumed a few weeks later, this time in her four-year-old season. She was unable to contest any horses her own age in Australia as she was foaled in England, and in an awkward month. Punters and bookies alike did not take much notice of the plain bay mare with a mediocre race record.

2003 and the First Melbourne Cup

The first start of her 2003 season was again unremarkable. A few places, a few group one races, but nothing outstanding. She finished as a 14-to-1 outsider in the Caulfield Cup, beginning a new partnership with Sydney jockey Glen Boss. Caulfield saw her coming from near last with 800 meters to go in the 2400-meter race. She finished fourth behind one of the favourites, Mummify. The first Tuesday in November 2003 was her first Melbourne Cup victory.

By now both the bookies and the punters had started to take notice of her. Starting as an 8 dollar second favourite she stayed at the back of the field for most of the race. With only the finishing straight to go, Boss wound his way through the field to win by one and a half lengths to the delight of all that had bet on her.

From there she was the favourite in almost every race that she ran. Makybe Dive was an unstoppable force, forcing all of her competitors to each her dust.

Rest of her Career and Retirement

Makybe Diva went on to win two more Melbourne Cups, and a number of other races. She was finally retired to stud at the end of 2005. She has had five foals to date, one of which proved to be a winner. The rest remains to be seen.